Zoom has just released the PodTrak P4 ($199), an impressive recorder with the built-in ability to easily conduct and record high quality telephone interviews. As more of our oral history projects include remote interviewing, most of the focus is on online web conferencing systems such as Zoom or TheirStory. Web conferencing systems add an important technical requirement for our interviewees/narrators who will need camera-enabled devices with fairly robust internet networking speeds in order to participate. For interviewees/narrators, it does not get any simpler or more accessible than to simply use a phone in order to participate in an interview. However, creating a high quality recording of a phone interview has always posed a bit of a challenge. The Zoom PodTrak P4 is a portable recorder that creates a simple and affordable option for conducting studio-quality telephone interviews.

Even in the age of analog recorders and landline telephones, oral historians have conducted oral history interviews over the telephone. The analog/landline solution required an adapter that routed the telephone signal into the recorder. A similar approach is taken with digital recorders using devices such as the JK Audio Quicktap, featured in a past post, where the interviewer routes both sides of the conversation from the phone signal to the recorder. A more professional approach allows the interviewer to use a professional quality microphone that is “mixed” with the telephone signal and routed to a recording device. This complicated set up uses an interface such as a JK Audio Broadcast Host ($500), which is similar to what would be utilized in a recording studio for a radio or podcast-style interview. The challenge with conducting a telephone interview when the interviewer uses a professional style microphone is routing the combined signal to the recorder, which often requires a mixing board, and routing the signal back to the telephone interviewee/narrator while subtracting out their signal in order to avoid annoying echo. This is what audio engineers refer to as “Mix Minus.”

With the recent popularity of podcasting, several mixing boards with recording capability have been released for combining multiple in-person microphone inputs with a telephone input for using Mix Minus to record a telephone interview. These multi-channel mixing board interfaces include Rode’s Rodcaster Pro ($599), the Tascam Model 12 mixer ($599), and the Zoom PodTrak P8 mixer ($499), all of which have built-in recording capabilities. Zoom has now incorporated the Mix Minus technology into the PodTrak P4 ($199) portable recorder.

The PodTrak P4 is a professional quality recorder designed for simplifying podcast-style recording (in-person and remote) in a way that combines quality, simplicity, and affordability. The PodTrak P4 has 4 XLR microphone inputs with professional quality microphone preamps. These XLR inputs have phantom power, so they can be utilized with either dynamic or condenser microphones, and the preamps can provide significant gain for use with even low-output microphones. Each recording channel has an independent gain knob as well as an independent headphone input.

To record an interview that includes an interviewer using an XLR microphone plugged into channel #1 or channel #2 (or both), you can connect a mobile phone to channel #3, or, using a USB-C cable, you can connect a computer or mobile device to channel #4 of the Podtrak P4, both of which utilize Mix Minus. In the following example, I have utilized a Shure SM7-b dynamic microphone plugged directly into channel #1 of the PodTrak P4. I then plugged a TRRS cable into my iPhone 11 lightning port using the Apple lightning to 3.5mm adapter that allows the use of conventional headphones/microphones with a lightning port. For this style of recording, the interviewer does need to utilize headphones plugged into the PodTrak P4 to hear the interviewee/narrator.

To hear the Podtrak P4 in action, I called Christian Lopez, head of Oral History and Media at the Richard B. Russell Library for Political Research and Studies at University of Georgia Libraries.

The PodTrak P4 is designed for recording podcasting style interviews. Some built-in features are more useful for podcasters than oral historians. The four sound pad buttons are designed to incorporate live sound effects, such as theme music, applause, or an occasional snare drum rim-shot, into the recording. Personally, I would recommend ignoring the sound pad buttons for an oral history interview, but, if you are interested, these buttons are customizable. For podcasters, this feature will be incredibly useful.

By default, the PodTrak P4 records a stereo mixdown, while simultaneously recording each mono channel separately, allowing for more nuanced mixdown using a computer after the interview. A signal pushed across a phone line will not sound nearly as good as an in-person interview conducted using an XLR microphone. However, isolating the telephone channel allows you enhance the signal and improve the overall sound of the telephone channel while leaving the XLR channel intact.

Listen to this example where I have enhanced the example interview with some minor EQ adjustment. Lopez switches from earbuds to speaking directly into the phone in Example #3.

The PodTrack P4 takes two AA batteries, and Zoom says that will provide up to 4 hours of life. That said, I am guessing there is variability as to whether phantom power is enabled on multiple channels. The underlying theme of this recorder is simplicity. There are no internal microphones or an internal speaker like you will find on the Zoom H5 portable recorders. You have limited options for configuring this recorder in the settings, although it does have a limiter and low-cut filter you can apply to each channel.

The PodTrak P4 has some significant limitations. The recorder has one recording setting (16-bit/44.1kHz .wav file), and there is no option to change the recording settings. I would prefer to have 24-bit/96kHz recording quality in this recorder. The PodTrak P4 is incredibly affordable at $199; however, there are no cables included in the box. If you want to use external power (which I strongly recommend), you will need to purchase a power adapter such as the Zoom AD-17 power supply and a separate USB-C cable, or utilize your own USB-C power adapter and cable. As much as Zoom is promoting the Mix Minus feature, I am surprised that they do not even supply a TRRS cable for connecting a mobile phone. A TRRS cable is a relatively rare cable (not something most people have around the house), so you may want to purchase a Rode SC9 3.5mm TRRS to TRRS Patch Cable for $30. If you want to go wireless, you can also purchase the Zoom BTA-2 PodTrak Series Bluetooth Adapter and connect your mobile phone via Bluetooth.

Although the web conferencing systems are getting a lot of attention as go-to options for remote interviewing, I have conducted remote interviews that experienced significant network dropouts, and we have had projects where interviewee/narrators’ need for access to camera-enabled devices and robust internet connectivity have posed significant challenges. Despite some limitations, the Zoom PodTrak P4 recorder makes a studio-quality telephone interview an affordable and simple reality. I plan to use this recorder for phone interviews, and I anticipate using several for Nunn Center projects. With remote oral history interviewing becoming a more standard practice, I see this recorder being an excellent option for interviewing in both oral history, fieldwork, and podcasting contexts. I believe the integration of mobile phone and computer connectivity (utilizing the Mix Minus technologies) into the PodTrak P4 is a game-changer that I hope indicates functionality that will be incorporated into future portable recorder releases by Zoom, as well as by other manufacturers like Tascam or Marantz.

0 Comments
By Douglas A. Boyd 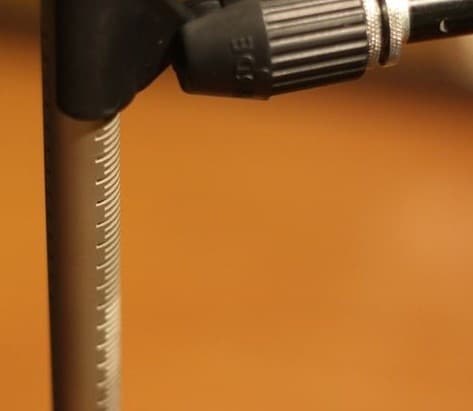 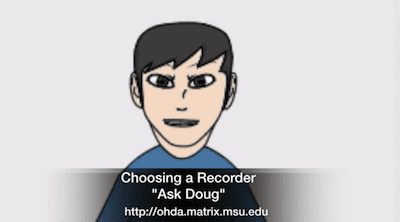